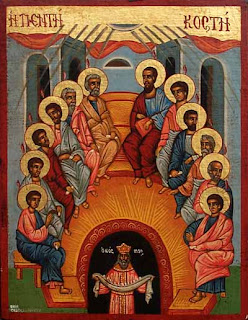 What is Pentecost?  Most of us think only of the coming of the Holy Spirit. But Pentecost was originally a Jewish celebration.

The Israelites celebrated three main feasts. The first, Passover, occurred in late spring and coincided with the celebration of the barley harvest.  At Passover they remembered how God freed them from physical and religious bondage. Now Christians celebrate “Pascha” (Orthodox Easter), to remember how Christ has saved us from the real enemy: death.

The second feast was Pentecost, so  named because it was 50 days after Passover (think Pentagon). It was celebrated in the summer and coincided with the wheat harvest. Pentecost commemorated the giving of the Law on Mount Sinai. They received the Word of God, which was the Bread of Life.

The third feast was Sukkot, or the feast of booths, which was celebrated in fall and coincided with the harvest of fruit and nuts. They remembered the way God dwelt (or tabernacle) among them, so they made mini tabernacles and lived in them.

Many of the devout Jews made pilgrimage to Jerusalem for Passover and stayed for Pentecost. That is why there were so many Jews in Jerusalem at the time. Pentecost was a joyous feast, but it was also a reminder of failure, for at Sinai the Jews worshiped the Golden Calf. It has been called the second fall. Three thousand men were killed because of their false worship. But when Peter preaches at Pentecost, three thousand are saved.  Luke assumes that we will understand the parallel here, but few of us do.

The new converts stayed in Jerusalem, sold all they had and lived together communally.  They “had all things in common.”  Is this how we are supposed to live?  If we want to live like the early church, should we sell all we have and join a commune?  Well, consider this: The only place where the Christians did this was in Jerusalem.  Why did Paul ask for donations for the Christians in Jerusalem? They were living in fear. Jesus had predicted the destruction of Jerusalem in Matthew 24. He told them to be ready. The Christians in Jerusalem were awaiting the coming tribulation and persecution. When it did happen in 73 AD, history tells us there was not a single Christian in Jerusalem. They had fled, as Jesus told them to do.

The chapter ends with the statement, “And the Lord added to the church daily those who were being saved.”  The word saved refers to both spiritual and physical salvation.
Posted by Marcia C at 8:14 PM