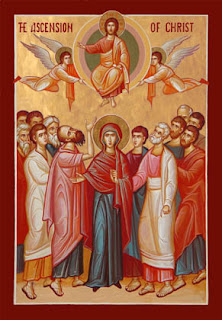 The Acts of the Apostles was written by Luke to “Theophilus,” which means “God lover.” Was this a person’s name?  Possibly, but it could also be a general term for the audience.  Instead of “gentle reader,” Luke wrote to “God lover.”

When the book of Acts was written, Israel had been in chaos for 500 years. The apostles were still asking Jesus, “Are you going to restore the Kingdom of Israel?”  They didn’t understand that the Kingdom of God is the church.

In Daniel 7, the fifth kingdom is described. It talks about one like a son of man.  This is talking about the Kingdom of God, the church.

Jesus' last words commanded the Apostles to be His witnesses in Jerusalem, in all Judea and Samaria, and to the ends of the earth.  This outlines the book of Acts.

It's interesting that the icon of the Ascension also depicts Jesus coming again.

After the Ascension the disciples are gathered in the same upper room where they had the Last Supper. They are listed in the same order. This shows the hierarchy of the church.  The women disciples are also mentioned. They were an important part of the early church.  In fact, according to tradition, Mary Magdalene took the Gospel all the way to Rome.

Who else was there? Verse 14 states that Mary the mother of Jesus was there with His brothers. Who are His brothers?  I always believed this meant His biological brothers, or rather half-brothers, born to Mary and Joseph after Jesus was born.  But the Greek word for brothers can mean cousins – or it can also mean any close relationship.  In fact, that same Greek word for brothers used in verse 14 is used in verse 15 and translated “disciples” (NKJV) and in verse 16, where it’s translated “brethren” and refers to the people gathered there.

Verse 18 states that Judas purchased a field and fell headlong and burst open in the field and his insides gushed out.  This seems to contradict the Gospel account, which states that he hanged himself. I thought this meant that after he hanged himself, his body fell on the ground and his insides gushed out.  This very well could be what it means, but it could be a metaphor for the way the soul of a sinful man will be spilled out in the day of judgment.  It also could be drawing a parallel to Antiochus Epiphanes in the book of Maccabees, who also burst open.

Verse 20 states “Let another take his office.”  This word “office” is episcopos in the Greek. Take away the first and last part of the word, and you get piscop.  From this we derive the word bishop.
Posted by Marcia C at 7:28 PM