Becoming Catechumens in the Orthodox Church 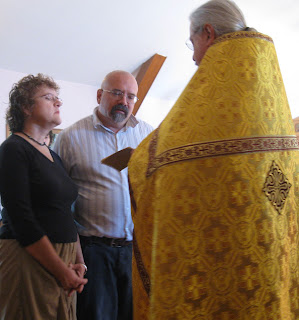 We’ve taken the plunge. We’re now catechumens in the Orthodox Church. I find people’s reactions interesting. Most people have no clue what Orthodoxy is, let alone what the term catechumen means. A Facebook friend simply said, “So explain what that is.”

The dictionary definition of catechumen is: “a person under instruction in the rudiments ofChristianity, as in the early church; a neophyte” (from www.dictionary.com)

The Wikipedia definition of catechumen is: “one receiving instruction from a catechist in the principles of the Christian religion with a view to baptism.”

For me it means becoming a disciple. Although I’ve been a Christian since I was very young, I’m discovering there is so much more to learn, an entire history of Christianity that I’ve known nothing about.

The leader of our catechumen class says that becoming Orthodox is “like becoming born again – again.” That’s how it is for me.

It began with powerful ceremony, where we repeated words that have been used for almost 2,000 years, whenever people made a public profession of faith in Christ.

Three times I answered, “I do renounce him.”

“Then blow and spit on him,” Father James instructed. (A skeptic friend later asked me, “So what exactly did you spit ON?” I explained that it was a symbolic gesture, that no saliva actually escaped my lips.)

Three times I was asked “Do you unite yourself to Christ?”

Three times I answered, “I do unite myself to Christ.”

Now we are taking classes with several other catechumens, who come from various backgrounds, but with whom I feel a tremendous bond. I’ve discovered a new family in this little community of believers.

After our classes, which will continue through the fall and winter, we will be chrismated (anointed with oil) and become full members of the Orthodox church. This will happen next year on Easter, which we call Pascha.

Interestingly, the first time we visited the Orthodox church was the Sunday after Pascha (Easter) of this year. I remember learning about Bright Week and shouting “Indeed He is risen!” on that day, little knowing that a year later I would become Orthodox. It’s also interesting to note, that while the Orthodox Pascha usually falls on a different date than the Western Easter, on these particular years, it is the same date as the Western Easter.

Stay tuned for more updates on our journey.
Posted by Marcia C at 9:35 PM 5 comments