The Trisagion Prayers are the "bread and butter" of Orthodox worship. We say these prayers as part of our morning and evening prayers. It's good to memorize these prayers. There is power in the ancient words. I have them taped to my wall, next to my icons.

In the name of the Father, and of the Son and of the Holy Spirit. Amen.

O Heavenly King, Comforter, Spirit of Truth, Who are everywhere present and filling all things, Treasury of good gifts and giver of life; come and abide in us, and cleanse us of all impurity and save our souls, O Good One. 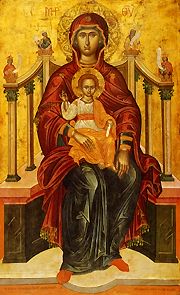 Most Holy Trinity, have mercy on us, O Lord wash away our sins, O master, pardon our transgressions. O Holy One, visit and heal our infirmities, for Thy Name's Sake.

Glory to the Father and to the Son and to the Holy Spirit, now and ever, and to the ages of ages, Amen.

Our Father, Who art in heaven, hallowed by Thy Name. Thy Kingdom come. Thy will be done, on earth as it is in heaven. Give us this day our daily bread. And forgive us our debts as we forgive our debtors. And lead us not into temptation, but deliver us from the evil one. For Thine is the kingdom, the power and the glory, of the Father, and of the Son, and of the Holy Spirit, now and ever, and to the ages of ages, Amen.

Email ThisBlogThis!Share to TwitterShare to FacebookShare to Pinterest
Labels: Worship


NOTE: I missed Bible study on the days we studied Acts 9-10.  I was sorry to miss the part about Cornelius.  It’s summarized here, but I know there is so much more.

Cornelius was the first uncircumcised Christian. Up until this time, all the converts were Jews. Cornelius was a “God fearer” – someone who worshiped the one true God but was not circumcised and did not keep Kosher. Up until this time the church had not baptized any God fearers, even though some believed in Christ. The Christians didn’t know if Gentiles could really be saved. God answers the question by causing the Holy Spirit to fall on the uncircumcised and unbaptized.

In Acts 11:25, Luke tells us that the disciples were first called “Christians” in Antioch.  The term “disciples” is used here to talk about all believers, not just the 12 disciples. Believers were also called “The Way” and “Nazarenes.”

In the early church we also see the following Greek words to describe the church leaders:


In the end of Acts 11, we read about the death of the second martyr: James, the apostle (the son of Zebudee and brother of John).

In chapter 12 we read about Peter’s miraculous escape from prison. In some ways his escape parallels the Exodus (and it happened during the Feast of Unleavened Bread).

Peter went to the house of Mary, but this was not the mother of Jesus. Mary was a common name among Jewish people, because it was actually the name Miriam, the sister of Moses.

The “John Mark” mentioned here was actually Mark, the author of the Gospel of Mark. Often when people have two names in the Bible, it’s because one name is Hebrew and one is Greek.  This is the case with Saul/Paul. Saul was the Hebrew name, but as he began to reach out to the Gentiles, he went by Paul, which was his Greek name.  (And I always thought he changed his name when he became a believer.)

Paul, Barnabus and John Mark went on the first missionary journey. When they first arrived in a city, they went to the synagogue. They always went first to the Jews in a city. For one thing, Paul believed they had the right to hear the Good News first. Second, they were looking for the Messiah, and they needed to know that Jesus was the Messiah. Also, they had a foundation for faith in Christ, since they already believed in the resurrection (at least the Pharisees did), and they had read the Law and Prophets. You’ll notice that when Paul preaches to the Jews, he starts with the prophets, but when he speaks to the Gentiles, he has to go back to the basics, even to creation. 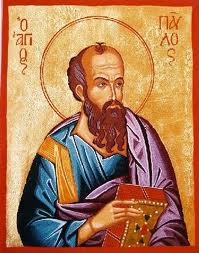 When Paul went into a city, he went to the synagogue and sat down.  Because he was dressed like a Pharisee, the people often would ask him to share something. He would take this opportunity to talk about Christ.

The first converts were almost all Jewish.  Towards the end of his visit, Paul would speak to the Gentiles as well, and there were a few Gentile converts.  However, when he returned to the cities on another journey, he found that the church was mostly Gentiles  because of the many new converts.

In Acts 13:46 Paul said, “It was necessary that the word of God should be spoken to you first; but since you reject it, and judge yourself unworthy of eternal life, behold we turn to the Gentiles.” Some people have interpreted this in a global sense, but really it is just talking about this city.  It was the way Paul typically preached when he went to a new city: to the Jews first and then to the Gentiles.

When Paul, Barnabus and Mark returned, they reported that a door had been opened to them to share the Gospel with the Gentiles.  This was good news, but it caused a problem. In chapter 15 we read that some of the Jewish Christians taught that the Gentiles needed to be circumcised. The people called in Paul and Barnabus to talk about this “question” (interesting choice of words). This was the first church council.

Peter spoke first, telling about how God gave the Holy Spirit to the Gentiles.  In verse 9, he states that the Holy Spirit purified their hearts by faith.  Note that faith and purity go hand in hand. There is no contrast between what you believe and what you do. Next Paul and Barnabus spoke, declaring how God had worked miracles among the Gentiles. But through all this, the people remained silent.

Next James got up to speak. We know that this is not the Apostle James, the brother of John, since he was martyred.  Was this James the brother of Jesus, or another James?  We aren’t sure here.  We do know that he had authority in the church, since the people listened to him. He stated that circumcism is only for the descendants of Abraham (and he quotes from the Old Testament to prove his point.)

He suggested that the church should write to the Gentiles and tell them to abstain from the following: things polluted by idols, sexual immorality, things strangled and blood.

What did he mean by "things polluted by idols"? In the culture where they lived, many people worshipped idols. When a farmer brought his herds to the market, he would first stop at the pagan temples and offer his entire flock to the false god. The priest of the temple would choose some for sacrifice and the farmer would take the rest to market. But all of the animals had essentially been offered to idols.  The idols’ temples became restaurants, where people could eat the food that had been used in the ritual sacrifice.  It often was the best meat in town. This meat was seen as polluted by idols.

The sexual immorality mentioned here was not only adultery and fornication; it also referred to incestuous marriages, which were common among the Greeks and Romans.

When an animal was killed by strangling, the blood remained in the meat. The Jews always butchered their animals, so the blood would run out. The Jews did not drink the blood because it is the source of life. Pagans, on the other hand, used blood as part of their ritual worship because they believed that drinking blood was taking the life force of the animal into yourself.

When James spoke, the people listened.  This is because he quoted from the Law.  More on this next time.