Reflections on an Orthodox Funeral


I will always remember Caryn for her glowing countenance and her love for everyone, especially the children. When I first met her, I didn’t even know she had cancer.  She never complained, even though I knew she suffered greatly.  Last week she breathed her last on this earth. 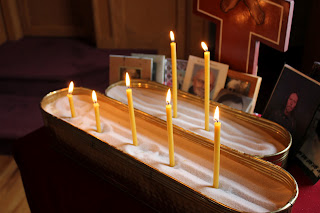 Caryn’s was the first Orthodox funeral I’ve attended.  It was sorrowful, but the service was so beautiful and reminded me of heaven. And there was such comfort in the ancient words, not only of the Scriptures, but also of the memorial service itself.  I knew we were using the same words that have been used at services for nearly two thousand years.

We began the night before at the funeral home with a “panikhida” or vigil (what some people might call a “wake”). The familiar Trisagion prayers (see a previous post) were followed by special prayers, psalms and hymns for the dead. Here are two of the hymns:

Thou only Creator Who with wisdom profound mercifully orderest all things, and givest unto all that which is useful, give rest, O Lord, to the soul of Thy servant who has fallen asleep, for she has placed her trust in Thee, our Maker and Fashioner and our God (Troparion).

With the saints give rest, O Christ, to the soul of Thy servant where sickness and sorrow are no more, neither sighing, but life everlasting (Kontakion).

Father James reflected on Caryn’s life, and we sang “Memory Eternal.” Afterwards, we ate a small amount of Kolyva, or boiled wheat and nuts sweetened with honey and a powdered sugar covering. The wheat is a symbol of resurrection, as mentioned in John 12:24:  “Unless a grain of wheat falls into the earth and dies, it remains alone; but if it dies, it bears much fruit."

Today was the funeral, which was held at the Greek Orthodox Church, where Caryn also attended. All three Orthodox priests in town officiated, wearing white to symbolize our hope of the resurrection. Once again, the service was beautiful, including the ancient Byzantine chants by the church’s chanter and two men singing the “ison.” The Scripture readings were about resurrection: I Thessalonians 4:13-17 and John 5:24-30.  Each priest gave a remembrance of Caryn, and we sang “Memory Eternal” in both Greek and English.

Afterwards a friend from choir drove our godparents, my husband and me to the cemetery in a small town north of the city. As we passed drought-stricken corn bordered by bright yellow late-summer sunflowers, we remembered Caryn’s life and recalled the love she showed to all.

At the casket was being brought to the grave, we sang the Trisagion Hymn--Holy God, Holy Mighty, Holy Immortal Have Mercy on us"--and then our choir friend sang “Memory Eternal” one last time. Fr. Nick placed ashes on the grave, and we each filed past to place a bit of dirt on the grave.

Afterwards we returned to the church for a traditional feast of plaki (fish and vegetables) as a symbol of mourning and fasting. But we also had red wine and baklava left over from Saturday’s Greek Festival, and enjoyed conversation.The fellowship of good friends brings healing at a time like this, and there is nothing quite like the feeling of family at an Orthodox church.

“Give rest O Lord to the soul of Caryn, who has fallen asleep.”

“May her memory be eternal.”

This video gives a taste of what an Orthodox funeral is like:

Email ThisBlogThis!Share to TwitterShare to FacebookShare to Pinterest
Labels: Customs